How do your friends and family feel about you practicing paganism?

My friends and family are mostly okay with me being pagan. Actually, most of them probably don’t even know that I am pagan unless they read this blog. It’s not that I’m “in the broom closet” or anything, it’s that spirituality and religion are things we don’t often talk about, so it’s never really come up. My mother’s side of the family is Catholic, although my mother is not– in fact, I don’t think she identifies as a Christian at all. She does, however, believe in god in the sense that she believes in a higher power and she is a a proponent for prayer. Any time I’m having a hard time with something, you can bet her advice is to pray about it (or stop caring so much about what people think, that’s a big one). That’s not to say that she thinks prayer is the answer to everything! She really sees prayer as a way to lift the burden of worry and anxiety, and get yourself to a place of action. Give your fears to god, so your mind is clear enough to do something about whatever is plaguing you. That’s an idea I can get behind. Anyway, the whole point of that paragraph was to say that even if she isn’t a Christian she is certainly Christian-like, and many of her values stem from that tradition and history. However, my mom is pretty liberal and even if she doesn’t understand paganism, she certainly isn’t afraid of it and I don’t think she believes that I’m some kind of devil worshiper or anything like that. So I suppose that’s good.

My father and stepmother are definitely Christian, although they don’t go to church anymore. When I was younger we would go almost every sunday, but as I got older it was harder and harder to get them to take us to services. But  they still call themselves Christians and they believe in Jesus Christ as their Lord and Savior. I don’t know how they feel about me being pagan but the nervous child in me says they do not approve. I mean, it took my father a long time to accept that I was gay (even though he tried very hard to not show me his disappointment), I can’t imagine it being easy to accept that I no longer accept Jesus in my heart. No offense to Jesus– it’s not that I don’t believe that a Jesus of Nazareth existed, because I do, and I’m sure he was a great  teacher. But I got off the Christian train long ago.

My wife is totally fine with it. She is not pagan, in fact she does not identify with any religion. She doesn’t believe in any god, or at least doesn’t know if god exists and doesn’t really need to know or care to find out. That has often confused me, as someone who has spent their entire life believing in some kind of higher power (with many different faces and manifestations over the years). I can’t imagine a life where I didn’t feel Spirit, I guess. You would think that would be a big obstacle for us, but it’s not. She encourages me to explore my faith because she knows it’s important to me, and she’ll even participate in ritual if I ask her to do join me. It was her wish, in fact, to have a handfasting as part of our wedding ceremony! And although she doesn’t believe in a higher power or a creator, or any of the many gods out there, she is totally okay with raising our kids in a religious practice. I appreciate that because it’s something that is really important to me (more on that later).

My friends don’t care what religion I am or how I worship. I actually talk about religion with my friends a lot and because I spent most of my childhood and adolescence in a Christian environment I still feel at ease talking about it. Leaving Christianity has actually really encouraged me to focus on interfaith work and cooperation so I talk about religion with a happy heart. I also really enjoy sending religious memes to my friends, like these: 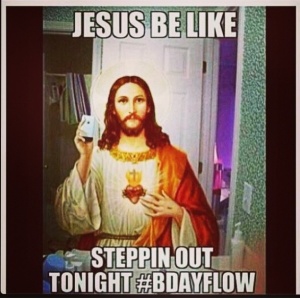 A Jewitchy Scrapbook of Shadows and a New Age, Gothic Grimoire

The Wilson Buzz
The Deep Down