Do/will you teach your children paganism? 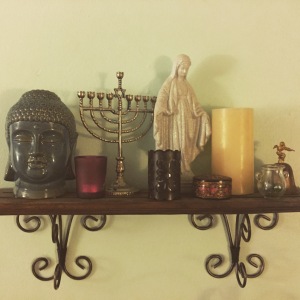 This question is important because I know a lot of pagans are vehemently against raising their own children in ANY religious practice, preferring that they choose their own path if that’s what they desire. I understand the ethics behind that. Many (but not all) pagans have experienced the pain and frustration around being forced to practice what you may not believe in, and everyone deserves a chance to explore their own spirituality, ask questions, and think critically about religion and theology. I agree with that. On the other hand, I do have a desire to teach my children what I’ve learned and to live a spiritual life with them I would find it really strange to be a committed pagan, and do ritual and celebrate Sabbats without my family. I want to be able to pass down my knowledge to my children, but also share spiritual experiences with them.

When I was a bit younger my answer would’ve been a yes, no hesitation. Of course I would want to raise my kids in the same religion as me! But now that I’ve given it more thought, I also want my children to feel safe exploring other faiths without  feeling shame, fear or guilt. And if they decide that no faith fits them, that’s okay, too. That’s hard for me to say, since spirituality is such a big part of my life and always has been. But even if it’s hard to wrap my head around, my kids will have support from me and Kourtney (who, being agnostic/atheist herself, totally gets it).

I’m just saying, I want to do ritual with my kids in a non-threatening, age appropriate way, AND help them to explore other faiths in a safe space. Perhaps going to a Unitarian Universalist church would be good in this instance– it’s something that I’ve been thinking about doing for myself anyway, since they honor respect teachings from Judaism and earth-based paths as part of their six sources (that might have been a good place for my Jewitchery to blossom). As a fan of interfaith work, I really admire UU churches for their dedication in honoring many faiths and creating a tradition that allows for them all. If I wasn’t so gosh darn anxious about meeting new people, I would check out their services. Anyway, perhaps a UU church would be a good place to start an exploration of other faiths with children since they tend to make space for everybody.

Long story short, I want to raise my kids pagan so yes I will teach them paganism, but I also want them to explore other faiths and decide on their own whether or not they want to be pagan as adults. #sorrynotsorry

A Jewitchy Scrapbook of Shadows and a New Age, Gothic Grimoire

The Wilson Buzz
The Deep Down
Forever A Cupid